SlimBliss Slenderite is a diet pill alleged to have been created by women, for women.

It’s one of two products that have been brought to market by a Surrey-based company called Protein Bliss. The other product is a biotin pill intended to provide women with healthier hair, skin, and nails.

There’s not a lot of information available about Protein Bliss.

The company website was first registered in 2016, their Facebook page has very few likes, and (at the time of our review) the company Twitter page was totally devoid of tweets.

Their Instagram page showed a similar lack of life and their Pinterest page had upped and gone.

Quick comment: If you looking for a dedicated female fat burner with masses of positive comments look here

One capsule is needed three times each day and it’s recommended all three doses be taken with a meal.

Some customers appear to feel the product helped support them in their quest to lose weight. Others say it’s a fail.

“Good product. It works and I am impressed with the results.”

“Great if you want something to make you feel horrible and bloated. Won’t do nothing else tho.”

“Good supplement. I’m using it in addition to a healthy diet and exercise and it seems to be doing the job.”

SlimBliss Slenderite is not intended for children or pregnant or nursing mothers. People who have existing health problems should always seek expert medical advice prior to using any brand of dietary supplement. The same goes for people who are using medication and for anyone who has existing health issues of any kind. 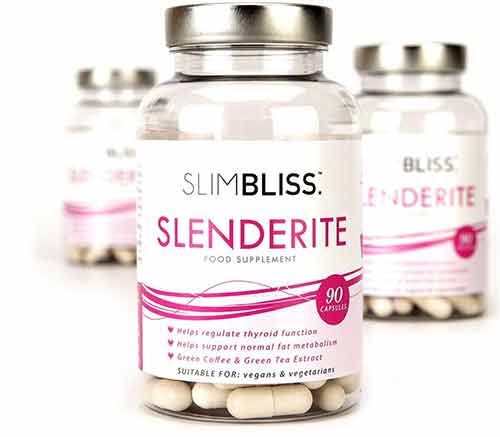 Women who want to buy SlimBliss Slenderite have two options. The first one is to buy it from the SlimBliss website. The second one is purchase via Amazon UK.

Customers who wish to do so can return unwanted products within seven days of receiving them, but it’s not clear if they can open them and try them before they do so.

Protein Bliss appears to be a company that is struggling to get off the ground and the lack of activity on the social networks hints that it could be a one-man-band or a side project that has been largely abandoned.

In theory, the pills may offer some level of weight loss support.

Green tea and green coffee bean extract are certainly good inclusions, and the caffeine and B Vitamins should provide an energy boost, but Iodine is only likely to benefit users who are iodine deficient.

A number of customers say the product let them down and many of the positive reviews we found were more tepid than enthusiastic.

Bearing in mind the questions regarding the availability of a money back guarantee, anyone thinking about buying SlimBliss Slenderite may want to reconsider and check some of the other options available instead.