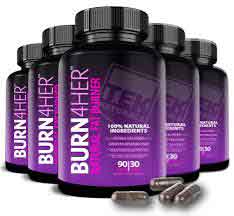 Burn4Her is a fat burner made in America by TEK Naturals and—ladies!—they made it especially for you.

At least that’s what they say in all the Burn4Her marketing material.

However, all the ingredients used in the formulation are diet pill regulars that can be found in plenty of diet pills that other manufacturers deem suitable for men.

For obvious reasons we are extremely pro fat burners for women – or diet pills in general that target women. But there has to be a unique selling point.

Quick comment: The product looks great, there is an obvious appeal. We do feel though that you have a better chance of success using LeanBean

What Is Burn4Her and How Does It Work?

According to the TEK Naturals website, Burn4Her is a scientifically formulated fat burning supplement that works in three powerful ways:

This is basic stuff. Most diet pills are designed to do these things and, like any of the other options on the market, Burn4Her encourages the body to burn fat by speeding up the metabolism.

This causes the body to burn calories faster and, when “combined with a sensible diet and a thoughtful workout regimen” the body will be forced to respond to the resulting lack of calories by starting to burn its fat for energy.

The formulation’s ability to suppress the appetite will support the recommended sensible diet by reducing hunger pangs sufficiently for capsule users to stick with the plan.

That’s the theory anyway. The reality will be dependent on the quality and quantity of the ingredients TEK Naturals has chosen to use. 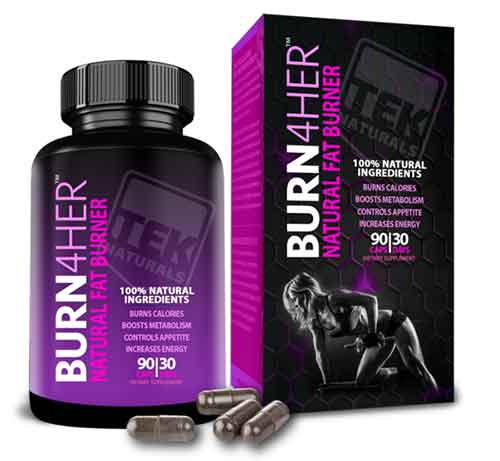 Customers are given the options of taking three capsules with breakfast or taking one capsule three times per day.

The only Burn4Her customer reviews we could find were the ones provided by TEK Naturals.

Burn4Her Side Effects and Health Issues

TEK Naturals fails to state if Burn4Her has any known side effects, but the formulation is unlikely to be suitable for women who are pregnant or nursing a child.

People who have existing health problems should always ask a doctor for advice before using any brand of dietary supplement for the first time.

The same advice is offered to people who are considering using Burn4Her alongside prescription drugs or medication.

Although TEK Naturals are also distributing Burn4Her via Amazon.com (US Customers only), it’s usually cheaper to buy directly from the company website because any attempt to leave the Burn4Her sales page results in the offer of a 10% discount code.

TEK Naturals have also created quite an impressive Burn4Her website, but it only provides the sales pitch, customers who attempt to place an order are automatically transferred to TEKnaturals.com.

We don’t question the potential of the ingredients used in Burn4Her.

All of them are known to be good. However, in several cases we have to question the inclusion rates and, given the use of so many diet pill regulars, we still feel this female fat burning formulation would be equally suitable for men.

When used alongside diet and exercise, Burn4Her will likely provide some improvement to the obtained. Green tea could do that alone. However, some of the other female fat burning products we’ve reviewed have superior abilities and longer guarantees.