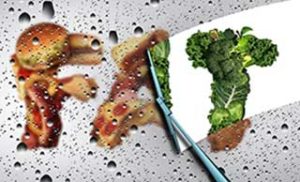 Fat blockers assist weight loss by helping ensure the body receives a reduced amount of calories each day, but the way they achieve this is very different to the way an appetite suppressant does.

Fat blockers reduce the calorie intake by restricting the amount of dietary fat the body absorbs each day.

Each gram of fat that is blocked contains nine calories, so it’s good way to lose weight.

Some fat blockers limit fat absorption by interfering with the actions of an important fat-digesting enzyme called lipase.

The prescription-only diet pill Orlistat works in this way and has the ability to block around 30% of ingested fat. Fat binders are a type of fat blocker that do not interfere with the way the digestive enzymes work.

They bond (bind) with the fat instead and the resulting union makes creates a substance the body is not able to digest. So, “fat blockers” is an umbrella term and “fat binders” refers to a fat blocker that works in a specific way.

Fat blockers, appetite suppressants and fat burners are by far the most effective and commonly used genre of diet pill or weight loss product.

Cholesterol is a form of fat, so the use of a good fat blocking diet pill can also be useful for helping to lower cholesterol levels. Bearing in mind the health risks associated with elevated cholesterol levels, this a desirable ability in itself.

Supplements that block fat can also aid the weight loss process by helping to suppress the appetite because the presence of the undigested fat in the stomach, especially when bound with a fat binder, helps create a feeling of satiety that reduces the desire for food.

Nopal is known to be particularly good in this regard.

Although many ingredients have fat burning abilities, and the choice of appetite suppressants is equally good, when it comes to fat blockers the choice is more limited. Orlistat is a fat blocker, but it’s a drug that is only available to people who have a prescription.

The two main natural ingredients that have fat blocking abilities are:

Fat blockers offer the most value when they are used alongside a healthy diet, but the same can be said for any kind of weight loss aid.

The problem with fat blockers is they are more likely to be abused by people who wish to go on eating in the same unhealthy way they have become used to without having to suffer the consequences.

This is not how fat blockers should be used and people who adopt a “cheat pill” mentality could be in for an unpleasant surprise.

The fat that is blocked by fat blockers does not just up and disappear. It travels through the digestive organs and leaves the body with the stool.

Even when fat blockers are used in a sensible manner the stool will be noticeably softer and greasier that normal, but when they are used as a cheat pill they have extra work to do.

There is more fat to block, so there is more fat to dispose of. Bearing in mind the way fat blockers work, this is not surprising, but the speed at which such a large amount of blocked fat can travel has caught many people unawares, resulting in red faces, soiled underwear, and embarrassing clean-up duties.

Some vitamins are fat soluble and, like all vitamins, they are necessary to help maintain good health. The use of fat blockers can lead to deficiencies, so vitamin pills may be required on a daily basis to help prevent dietary inadequacies.

When they are treated with respect, fat blockers can be a valuable dieting aid, but they should never be abused.

Anyone who is serious about slimming down and getting in shape will need to use take a sensible approach to weight loss and make a serious effort to restrict their calorie intake and stick to healthy food options.

This is the important first step that all dieters must take.

Fat blockers enhance results, they are not a get out of jail free card that allows people to eat all the wrong food without paying the price.

Which Fat Blockers are most effective and most popular